A mangrove tree in Darwin, Australia

Darwin is the capital of Australia’s Northern Territory (aka the country’s ‘Top End’), the least populous of Australia’s eight major states and territories. While the territory’s interior is known for its vast and arid outback, the northern coast features wetlands and mangroves. As you can imagine, the area’s climate is tropical, frequently humid, and prone to cyclones and monsoon rains. 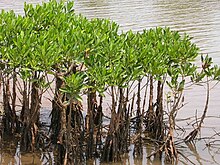 Mangroves are adapted to saline conditions.

A cluster of mangroves on the banks of Vellikeel river in Kannur District of Kerala, India CC BY-SA 3.0

Because mangrove trees thrive in saline intertidal environments, they act as a bulwark against erosion, their huge and elaborate root systems dissipating wave energy. Mangroves also provide shelter and sustenance for a variety of creatures—including birds, fish, crabs, and crocodiles—here on Darwin’s shores. ( information for bing image of 30th May, I am waiting for permission to use it since it is copyrighted to louise Denton at Printerest ) https://wallpapercrafter.com/130895-nature-landscape-trees-plants-river-sky-clouds-water-long-exposure-mangrove-australia.html However this image seems to be everywhere, you will find it through the link on an American site.?? More than 40 per cent of Australia’s mangroves are found in the Northern Territory.(105.7 ABC Darwin: Emilia Terzon)

Australia has approximately 11,500 km of mangroves, primarily on the northern and eastern coasts of the continent. Areas where mangroves occur include the intertidal zone of tropical, subtropical and protected temperate coastal rivers, estuaries, bays and marine shorelines. Less than 1% of Australia’s total forest area is mangrove forest.
Although mangroves are typically found in tropical and subtropical tidalareas, there are occurrences as f…Wikipedia · Text under CC-BY-SA license

Australian mangrove forests comprise 45 plant species from 18 families, which is more than half the world’s mangrove species. One tree species, Avicennia integra, is found only in Australia – in the Northern Territory, east of Darwin.
Each mangrove tree species is specific to particular latitudes and levels of tidal inundation. The greatest diversity of species is found in the far northern and north-eastern areas of Australia, and declines rapidl…Wikipedia · Text under CC-BY-SA license Mangrove forests provide breeding nurseries for a wide range of fish and crustaceans, including many species of commercial and recreational value, for example, barramundi (Lates calcarifer), mangrove jack (Lutjanus argentimaculatus), mud crabs (Scylla serrata) and banana prawn (Penaeus merguinensis). The forests also provide a habitat for spat settlement and development of oyster species.
Many terrestrial fauna, such as insects, reptiles, frogs, birds and mammals, use mangroves for food, sh…Wikipedia · Text under CC-BY-SA license

Mangroves protect coastal areas from erosion, storm surge, and tsunamis. The massive root systems of mangroves are efficient at dissipating wave energy. Mangroves retard the tidal movement of water, allowing sediment to be deposited as the tide comes in, and leaving all except fine particles when the tide ebbs. Mangroves therefore build their own environment.
The commercial and recreational fishing industries are prime beneficiaries of mangrove forests, which …Wikipedia · Text under CC-BY-SA license

Threats to mangrove ecosystems include;
• coastal modifications such as reclaiming land (e.g. for building canal estates and marinas);
• erosion of shorelines in coastal lakes and estuaries;Wikipedia · Text under CC-BY-SA license

About one third of the total area of mangrove forest in Australia is privately owned, including Indigenous reserves. Approximately 18% of Australia’s mangrove forest areas fall under the protection of National Parks and other reserves.
Mangroves are protected in Queensland under the Fisheries Act 1994, and in Western Australia under the Wildlife Conservation Act 1950.Wikipedia · Text under CC-BY-SA license

How Darwin’s iconic mangroves are fighting back against rising sea levels and climate change: ” Darwin’s mangroves appear to be fighting back against climate change, but it is unclear if the spindly plants will win their unique race to grow above rising sea levels.” ABC Radio Darwin / By Emilia Terzon

From the easily unearthed Wikipedia article we know “why Darwin”, unfortunately other sites either also use Wikipedia else contain less succinct information.

Say what you think, Cancel reply

Tzvi Freeman« PreviousPity on the CosmosNext »All in One Zion is redeemed by the study of Torah, and its captives through charitable deeds. (Isaiah 1:27) Exile is more than a geographical circumstance. Even if every Jew lived comfortably in the Land of Israel, we might all still be in exile. Exile within our own land. Exile is a state […]

Shared from The Poets shoes. https://www.thepoetsshoes.com/post/king-jesus

ABBA FATHER….. I Penned this poem today after experiencing a deep sadness when I tried to get my head around all the suffering and brutality that occurs in the world. Tears welled up, and overflowed, with the enormity of unfairness, of poverty, of anxiety, of depression, and of feeling not being able to do anything […]

TODAYS Beautiful Hadith is about Families

Narrated Malik (RA): We came to the Prophet (ﷺ) and we were young men nearly of equal ages and we stayed with him for twenty nights. Allah’s Messenger (ﷺ) was a very kind man and when he realized our longing for our families, he asked us about those whom we had left behind. When we […]

Where observation and imagination meet nature in poetry.

A Little Writing Workshop of Horrors.

Understanding ourselves and the world we live in.

I do things what I LOVE to do

🌼shout it from the rooftop